The Company reported that cash collections for the first quarter were A$3.8 million up A$0.8m or 25% versus Q4 2018, the highest ever recorded quarterly cash collection in its history. This was mainly driven by strong account renewals in Thailand and higher collections from Indonesia’s classified business that introduced paid subscription in September 2018. The Group also recorded A$2.6 million in unaudited revenue for the first quarter, an increase of 30% compared to the same period last year. 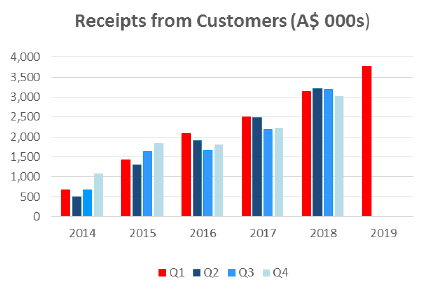 As communicated in Q4 2018’s results, the receipts above do not include net receipts from the auction business, which are separately disclosed in the quarterly cash results.

Cash receipts growth and stable expenditure led to a decrease in net operating cash outflow quarter on quarter of 20% to A$2.0 million, with over 60% of the Cash Receipts growth flowing through to a reduction in Cash Outflows. This is the fourth consecutive quarter of net cash outflow improvements. This is a result of iCar Asia’s operations in Malaysia and Thailand now being consistent positive cash contributors, Indonesia halving its net cash outflow due to cash receipts growth on a stable cost base and corporate costs remaining stable versus Q1 2018. These trends are expected to continue through 2019 resulting in a consistent reduction of net operating cash flow as the Company progresses to cashflow breakeven. 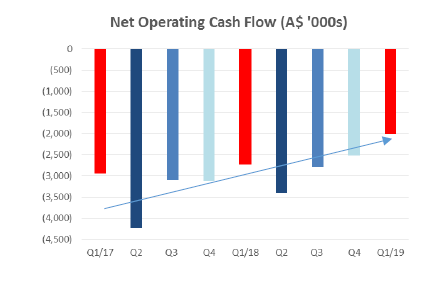 The Company closed Q1 2019 with A$7.3 million in cash and cash equivalents. The Company also has conditional access to additional funds of up to A$16.5 million consisting of a A$5 million debt facility and proceeds of share options of A$11.5 million contingent on the prevailing share price on or before the option expiry date. The Company expects to utilize only its existing cash and cash equivalents as it grows the business to EBITDA and cashflow breakeven and is not factoring in drawing down on the loan or any proceeds from options in its current expenditure plans.

iCar Asia taking the next steps in each market

Malaysia had its second consecutive quarter of positive EBITDA margin and cashflow in Q1 2019. March 2019 audience saw an increase of 25%, and leads generated were approximately the same as March 2018. The strategy to continue towards listing quality resulting in deletion of low quality or sold listings resulted in a 20% decrease year on year in listings for March 2019. Paid accounts continued to improve and were up 6% versus December 2018 as the acquisition and winback of accounts continues.

Thailand had its first quarter of positive EBITDA margin and cashflow in Q1 2019 after achieving its breakeven in December 2018. Account volumes remained at the same levels as Q4 2018 while listings marginally increased by 1% year on year in March 2019. Audience and Leads followed the same trends, and decreased (41% and 27% respectively), however these were both subject to the one-off impact of the general election in late March.

Indonesia had further progress in its monetization strategy for Used Car. Continued take up of Used Car subscriptions resulted in 12% more account in March 2019 versus December 2018. Audience increased by 4% year on year while leads decreased by 8%, with both being impacted by the general election scheduled for mid-April. Listings decreased 13% in March 2019 year on year in line with the expectations of listings monetization and the restriction of free listings.

The CEO of iCar Asia Limited, Mr. Hamish Stone commented: “Q1 2019 shows a solid start for iCar Asia in the year that it will reach EBITDA breakeven. Malaysia and Thailand were both EBITDA and cashflow positive in Q1 2019, with Indonesia almost halving its EBITDA losses at the same time. With corporate costs remaining flat, these are the milestones we need to continue to achieve on the path to breakeven. The performance in Q1 2019 was encouraging and laid down a strong base for us to continue the momentum into the remainder of the year.”

iCarAsia's Mobil123 and Carmudi will work together in three core sectors